Nevermined is a digital ecosystems builder where different entities can share and monetize their data and make an efficient and secure usage of it even with untrusted parties. 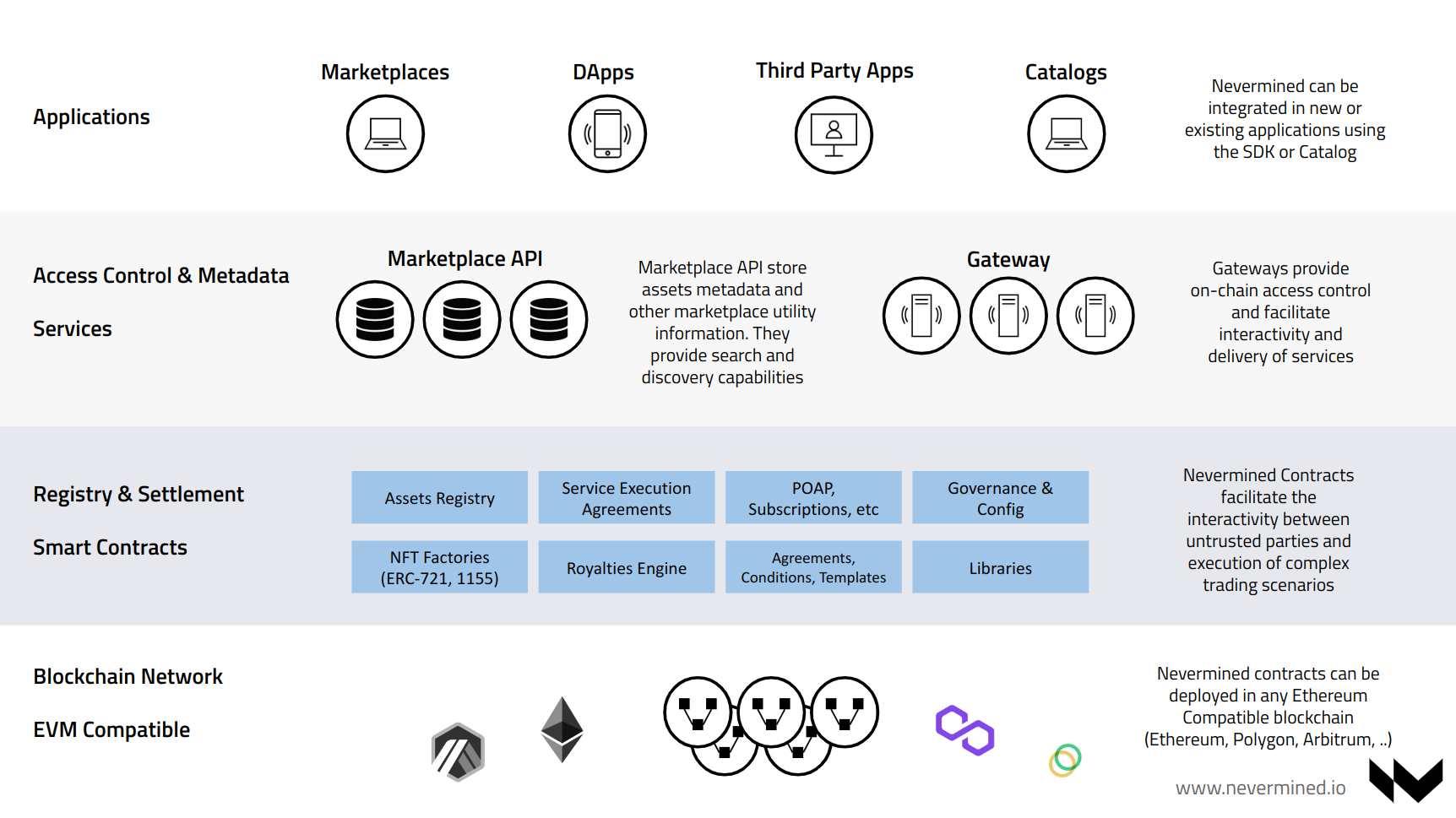 Nevermined Smart Contracts provide the core of the Data Ecosystem. Using an Ethereum network and implemented in Solidity, the Smart Contracts allow the creation of complex interaction between parties around digital assets.

The control of the Smart Contracts (deployment, upgrade) is typically a responsibility of the Governance committee of the Digital Ecosystem. The team responsible for the definition, deployment and maintenance of the whole system.

A typical user of the ecosystem doesn’t need to know anything about the underlying Smart Contracts or Blockchain. All the business logic is encapsulated in the client libraries so typically there is no direct integration between the users and the Smart Contracts.

Nevermined provides a DAOs contracts framework that allows the governance of a digital ecosystem.

The Nevermined Marketplace API is an Open Source micro-service that allows to store Assets metadata in an off-chain repository. It provides a plugins system allowing to persist the Metadata in ElasticSearch. The Marketplace API exposes the functionality for searching metadata using multiple filters and parameters.

The Marketplace API is typically the backend used for Data Marketplaces or Data Catalogs for storing all the Metadata of a specific domain related to a Marketplace or Catalog. It also provide the management of typical capabilities you can find in a Marketplace (user profiles, bookmarks, etc).

The Nevermined Node is an Open Source micro-service in the Nevermined ecosystem. The Node is the technical component executed by Data/Compute Providers allowing them to provide extended data services (e.g. storage and compute). The Nevermined Node, as part of the Publisher ecosystem, includes the credentials to interact with the infrastructure (initially cloud, but could be on-premise).

The Node allows also the encryption and decryption of content via:

The Nevermined Compute API is an Open Source micro-service in the Nevermined ecosystem. It’s a component in charge of orchestrating the execution of compute jobs in the premises of the Data/Compute Providers.

In Nevermined the Data/Compute Providers can publish services saying they offer compute capabilities to the network on top of their data under some conditions for a given price. The Compute API is in charge of, after all the verifications made by the Nevermined Node, to manage all the infrastructure to move the algorithm where the data is and track the execution of these ephemeral environments.

The libraries are packaged and delivered in the typical formats for each language allowing easy integration:

The Nevermined CLI tool enables to connect to the Nevermined Data Ecosystem and interact with it using the command line interface. It orchestrates all the underlaying components allowing to:

Are the Nevermined tools (not Open Source) allowing to automate, integrate and operate the rest of the components of the stack. The main tools available are:

The Nevermined Contract Tools allow to deploy and upgrade smart contracts across multiple networks (production or testnet, public or private) mitigating the risk loose the control of the Smart Contracts or leave them in a non-functional way.

This approach allows to: