This SPEC introduces the concept of asset Data Provenance in Nevermined platform based on the W3C Provenance specification.

The intention of this document is to discuss how data provenance can be established in a decentralized system, permitting integrity validation of this provenance information.

The main objectives of this SPEC are:

The design of Nevermined using both specifications is critical because it enables the construction of a complete and decentralized provenance solution where independent parties can collaborate in the common problem of delivering goods without relying on a central party, and providing transparency, complete traceability, efficiency and a unique source of truth.

In particular, the data model includes both Type and Relation categories.

Type category contains entity, activity and agent which are core components. Relations category defines key relationships between different types of components, which can be mapped into specific PROV model relations. 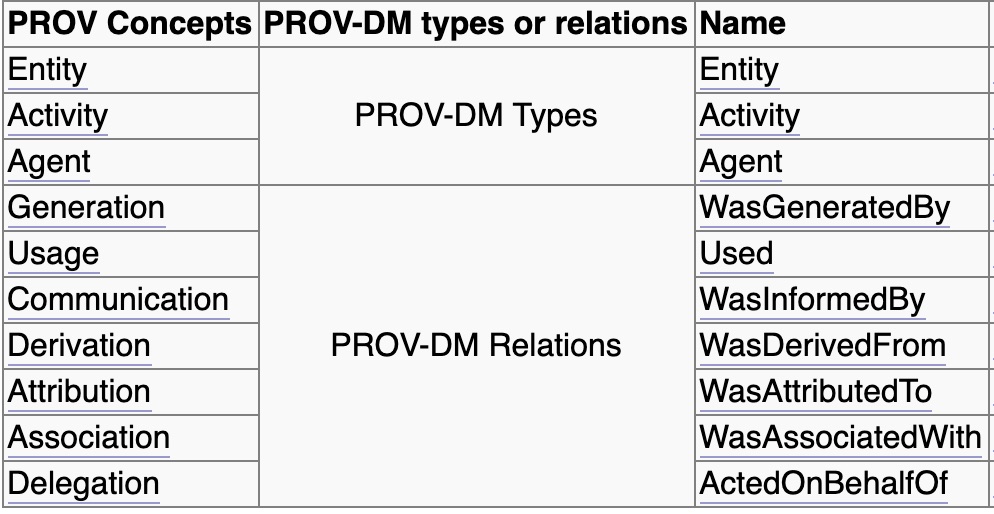 Provenance information can be modeled as the interaction between Agents and Entities related via the Activities between them:

In PROV, physical, digital, conceptual, or other kinds of things are called entities. Examples of such entities are assets, a web page, a chart, a spellchecker, etc.

An agent takes a role in an activity such that the agent can be assigned some degree of responsibility for the activity taking place. An agent can be a person, a piece of software, an inanimate object, an organization, or other entities that may be ascribed responsibility.

Activities are how entities come into existence and how their attributes change to become new entities, often making use of previously existing entities to achieve this. They are dynamic aspects of the world, such as actions, processes, etc. For example, if the second version of document D was generated by a translation from the first version of the document in another language, then this translation is an activity.

Relations between agents and entities are open but there are some common relations that can be used as reference:

Generation: Register a new entity generated by an agent (wasGeneratedBy)​

Generation is the completion of production of a new entity by an activity. This entity did not exist before generation and becomes available for usage after this generation.

Generation, written wasGeneratedBy(id; e, a, t, attrs) in PROV-N (a notation for provenance aimed at human consumption), has:

While each of id, activity, time, and attributes are optional, at least one of them must be present.

PROV uses qualified names to identify things for data provenance, which is essentially a shortened representation of a URI in the form of prefix:localpart.

Derivation is a transformation of an entity into another, an update of an entity resulting in a new one, or the construction of a new entity based on a pre-existing entity.

The following descriptions are about derivations between did:nv:e1 and did:nv:e2, but no information is provided as to the identity of the activity (and usage and generation) underpinning the derivation. In the second line, a type attribute is also provided.

With such a comprehensive description of derivation, a program that analyzes provenance can identify the activity underpinning the derivation, it can identify how the preceding entity did:nv:e1 was used by the activity (e.g. for instance, which argument it was passed, if the activity is the result of a function invocation), and which output the derived entity did:nv:e2 was obtained from (say, for a function returning multiple results).

Association is an assignment of responsibility to an agent for an activity, indicating that the agent had a role in the activity.

An association, written wasAssociatedWith(id; a, ag, pl, attrs) in PROV-N, has:

The following examples are about the association between one activity did:nv:ac1 and one agent did:nv:a00. In the second example, a type attribute is also provided.

Delegation is the assignment of authority and responsibility to an agent (by itself or by another agent) to carry out a specific activity as a delegate or representative, while the agent it acts on behalf of retains some responsibility for the outcome of the delegated work.

A delegation link, written actedOnBehalfOf(id; ag2, ag1, a, attrs) in PROV-N, has:

In the following example we can see how the agent delegated did:nv:a1 acts on behalf of the did:nv:a2 responsible.

Usage is the beginning of utilizing an entity by an activity. Before usage, the activity had not begun to utilize this entity and could not have been affected by the entity. (Note: This definition is formulated for a given usage; it is permitted for an activity to use the same entity multiple times.)

Given that a usage is the beginning of utilizing an entity, it is instantaneous.

In the following example we can see how to associate the activity did:nv:ac1 with the usage of the entity did:nv:e1 in some specific moment.

An activity is something that occurs over a period of time and acts upon or with entities; it may include consuming, processing, transforming, modifying, relocating, using, or generating entities.

Taking into account the relations examples, the scenario where a new asset (entity) is created (generation), modified (derivation) and used by a third-party entity can be translated into this:

For describing the architecture we are gonna use as a reference a supply chain use case. In this scenario a company manufacturing some goods needs to deliver them to the final customer. To do that the goods need to be transported by different shipping companies until the goods are handed over to the final recipient.

As an example to illustrate the architecture we are gonna describe the scenario with the following 4 different actors:

The end to end scenario includes the following steps: 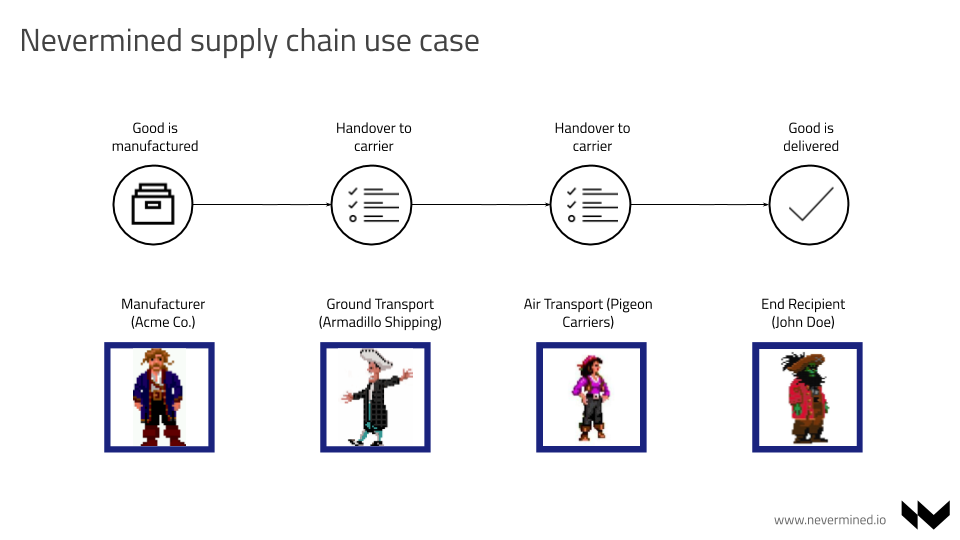 Across the complete supply chain scenario described above different parts of data are generated since the good is manufactured until it is delivered to the end recipient. Here some details about that:

Taking into account the above details we can distinguish different kind of data generated:

Nevermined provides a decentralized ecosystem where all this data can be registered and shared between all the agents participating during the supply chain process. It enables the registering of the files generated by the supply chain flow, making them available between the agents independently on the underlying technology. Also enable the registering of the metadata associated with the complete flow allowing to provide a complete lineage of the whole process. All this information is recorded in a decentralized backbone that works as a source of truth for all the parties.

Nevermined doesn’t require to replace the existing supply chain software platforms each agent in the system has. It integrates to them and augments their existing capabilities allowing to make available the relevant data generated to the agents participating during the supply process.

Taking into account the Scenario described before, the end to end flow can be detailed in the following steps:

Acme Corp. (Manufacturer) has created some goods that need to be delivered to John Doe (End Recipient). Acme uses the supply chain management Oracle SCM platform. When the good is created some relevant data (files, certificates, etc.) is created in the SCM platform. As a complement to that, the good created is registered into Nevermined (via SDK integration). This allows to:

The handover between carriers could include multiple steps and companies. Also intermediate storage in delivery centers, goods validation or certification, etc. For sake of simplicity here we only describe a simplistic end to end flow, but in essence a complete scenario involving additional steps could be very similar.

Handover to the end recipient​

Pigeon Carriers needs to deliver the goods to John Doe (End Recipient). During this process and very similarly to the above described the following things happens:

This makes it possible to track end to end the complete cargo flow involving independent agents. The provenance record is immutable and cryptographically secure, providing a transparent and unique source of truth that can be consulted by all the agents involved during and after the completion of the flow. This could allow John Doe to validate that the temperature of the goods were correct during transportation and using the GPS coordinates the cargo never went through unexpected locations. 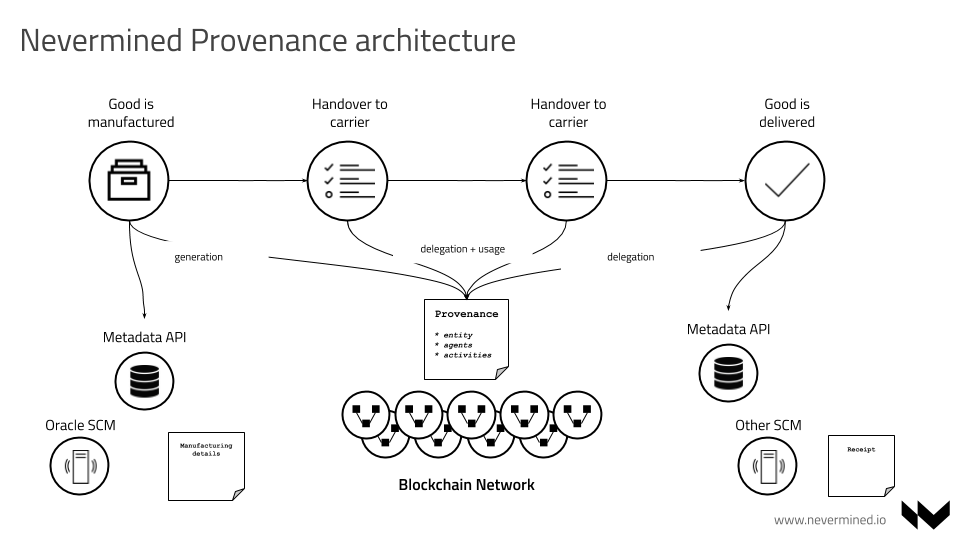 The Provenance Registry provides a unique source truth of the provenance information registered in the Nevermined network. It is a generic record where the entities (digital or physical assets) represent their complete life-cycle. When it’s necessary to represent the interaction between independent agents (Acme Corp. hands over a good to Armadillo Shipping), it’s necessary to provide the digital signature of the agents participating in the transaction.

Using the scenario already described and the W3C PROV specification the complete flow could be described as follows:

All the different actors (Agents in PROV terminology) have associated a digital identity allowing their identification and further authorization and authentication in the network. In Nevermined all the different entities can be registered as a DID. In our example:

The different agents DIDs can be resolved to DDOs including the user metadata:

The registration of an identity in the network requires the following steps:

Using this method, different and totally independent actors of the supply chain scenario can register their digital identity in the network and be discovered/resolvable via the DID on-chain and the agent metadata.

In the same way that agents are registered in Nevermined, all the different assets (Entities in PROV terminology) are registered as part of the network and have associated a DID and some metadata in DDO format. This inherits all the benefits of using Decentralized Identifiers, including the integrity validation of metadata associated with an entity.

In the Nevermined Metadata specification, a DDO includes some services that are included in the entity/asset registered in the network. Typically this list of services can include:

To guarantee the integrity of the provenance information, the complete provenance JSON object inside of the Provenance service is serialized and hashed using keccak256.

This generated checksum will be stored as part of the Provenance service in the checksum attribute.

How to compute the provenance checksum​

To generate the checksum in a way that can be computed and verified multiple times, the JSON object must be serialized using the following rules:

This must generate a compact JSON object of only one line that can be hashed and the verification of the hash can be re-calculated.

The Open Provenance Model (OPM) defines a data model that is open from an inter-operability viewpoint but also with respect to the community of its contributors, reviewers and users.

It has several tools & libraries: