This SPEC introduces a pattern for integrating independent Domain Controller system to manage the identity authorization with the Nevermined Service Execution Agreements (SEAs) (also called "Service Agreements" or "Agreements") as contracts between parties interacting in a transaction.

Corporate environments utilize complex identity management and access control via Domain Controllers (i.e Active Directory). These solutions allow to authenticate and authorize corporate users of a specific domain or network. Implementations like Active Directory enable the management of individual or group permissions within the organization assigning security policies. At the same time, decentralized ecosystems allow the interaction and collaboration between different users part of the network using Decentralized Ledger Technologies (DLT) as source of truth of the shared network. In the data ecosystems where different organizations are members of the same network or consortia, it’s a challenge to handle how the identity is managed within the organization (centralized) and how these different organizations can interact with each other re-using their existing Domain Controllers without moving all the existing identity management rules to a new silo or environment (centralized or decentralized).

The main motivations of the solution described are:

Nevermined Identity Management solution is designed based on the Verifiable Credentials & Decentralized Identifiers specifications as building block in the design of the solution. So some of the terms and concepts used are based on these specifications.

The actors identified in the solution described are: 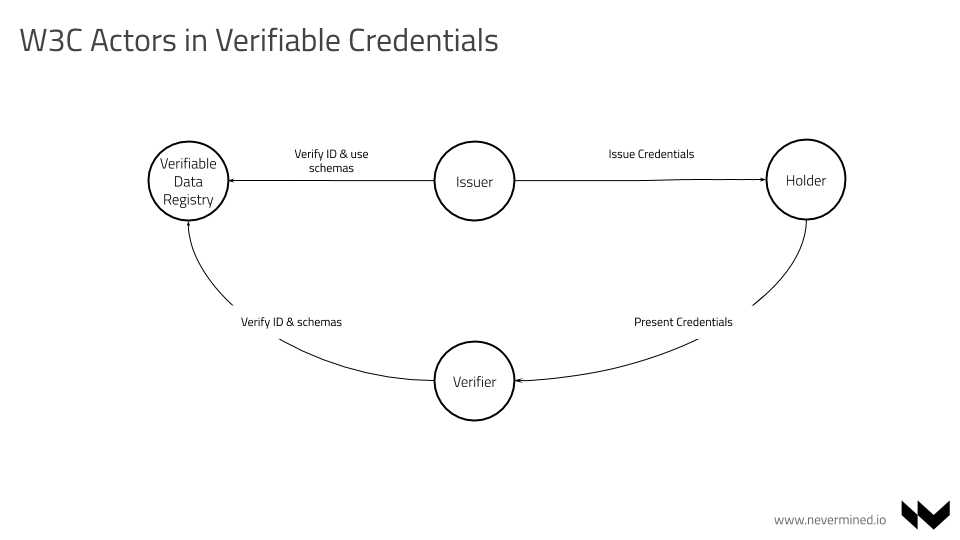 The main requirements used to designed the solution are: 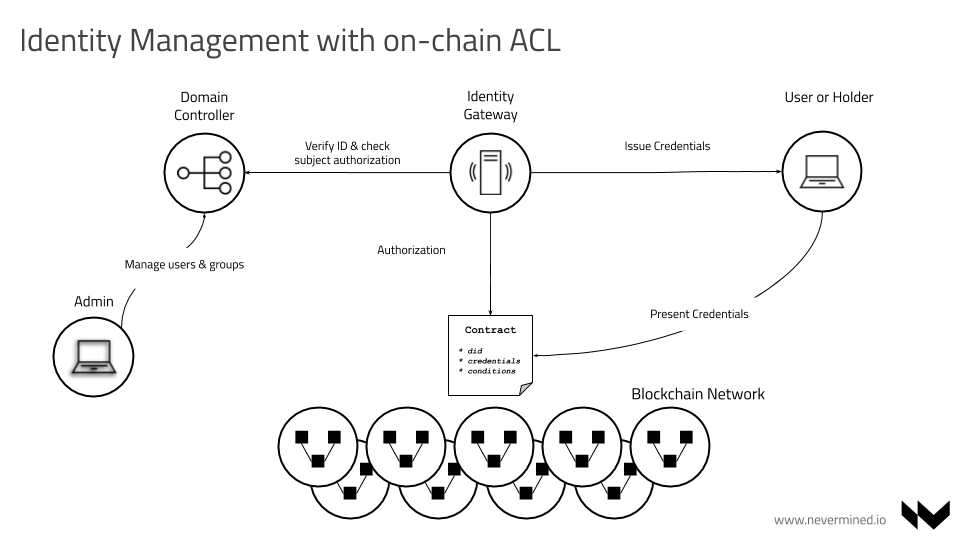 In Nevermined an Asset can represent any kind of subject registered in the network. Typically assets represent datasets, algorithms, services, etc. Any registered asset within Nevermined always has associated a Decentralized Identifier (DID) that can be resolved into a DID Object (DDO).

Typically a DDO includes metadata information describing the asset and the services that are offered by that asset to the rest of the network (access, computation, etc.). In addition to this, a DDO can include a portion describing the users and/or groups that can interact with the asset. This is modeled in the DDO in the shape of W3C Verifiable Credentials.

Here you can see an example of a fragment of a DDO including the credentials of an asset for different subjects:

JSON Web Token (JWT) is an open standard RFC 7519 that defines a compact and self-contained way for securely transmitting information between parties as a JSON Object. This information can be verified and trusted because it is digitally signed. JSON Web Tokens can be signed using a secret (with HMAC algorithm) or a public/private key pair using RSA.

In the architecture design we use JWT for encapsulating the messages between the different parties. JSON Web Tokens consist of three parts separated by dots (.), which are:

In this architecture document, all the JWT messages sent from a client to a server are using the HTTP Authorization header with the Bearer scheme. Example:

The header contains the metadata for the token and at a minimal contains the type of the signature and/or encryption algorithm:

In our case the header is gonna look like this:

The payload contains the claims. Claims are statements about an entity (typically, the user) and additional metadata. There are three types of claims:

In our case the payload will have the following attributes:

Here an example of the payload:

In this architecture the Identity Node is in charge of:

Interactions between the actors​

The following flow describes the interaction between actors allowing a Holder to present credentials related to a subject authorized by a Domain Controller.

The different steps are:

The claims that should be contained in a JWT Authorization Grant depend on the action that we want to perform on the Node. The claims validation follow RFC7523. Overall the claim options look like this:

These claims are specific to Nevermined

To request a JWT access token a client needs to make a request to the token endpoint (/api/v1/services/oauth2/token) by sendinf the following parameters using application/x-www-form-urlencoded format as per RFC6749 with:

To complement this, the Identity Node could integrate a cache system to keep track of the credentials granted during their life-cycle, and expose a method for revoking credentials immediately. In that scenario if a Domain Account needs to revoke some credentials related to a Holder and a Subject, it should send a request to the Identity Node using the following format:

Where the JWT payload is:

Having a standard JSON document or subtract, the common operations used to serialize fragments of DID Documents is as follows: