The main motivations of this SPEC are:

A DID is a unique identifier that can be resolved or de-referenced to a standard resource describing the entity (a DID Document or DDO). If we apply this to Nevermined, the DID would be the unique identifier of an object represented in Nevermined (i.e. the Asset ID of an ASSET or the Actor ID of a USER). The DDO SHOULD include the METADATA information associated with this object. The DDO is stored off-chain in Nevermined.

In Nevermined, a DID is a string that looks like:

which follows the generic DID scheme. Details about how to compute the DID are given below.

Here you have the complete flow using as example a new ASSET: 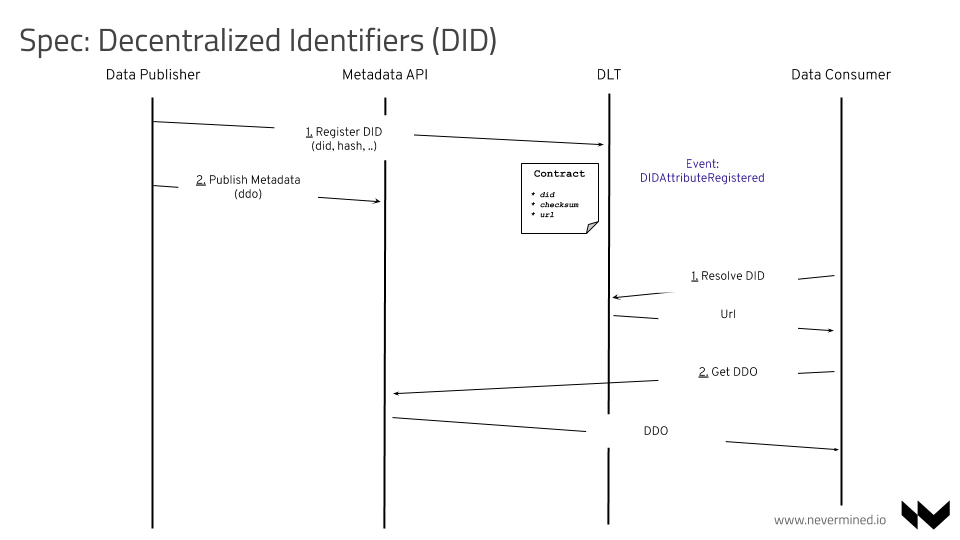 A DDO document is composed of standard DDO attributes:

Asset metadata can be included as one of the objects inside the "service" array, with type "metadata".

The attributes included at that section are:

It's stored under the attribute userId. It's the unique identifier representing an user. The user authorization of Metadata documents is built around that attribute and only the user authenticated with that userId will be able to modify the metadata

The userId will be a string storing an identifier in UUID format.

It's stored under the attribute appId. The application Id identifies an unique application. It helps to refer to the specific domain/application where the DDO belongs to. Specifying that attribute will allow to have the same metadata storage providing service for different applications, and each application will be able to filter by that appId.

The appId will be a string storing an identifier in UUID format.

It's stored under the attribute versions. The versions list stores the reference to all the changes done to the Metadata document.

The versions attribute will be an array of objects storing the sorted list of all the different changes.

Each version also can contain the location of each DDO version in a decentralized immutable storage:

Here we put together all the changes included at the _nvm section:

Each type of asset (dataset, algorithm, workflow, etc, ..) typically will have associated different kind of services. There are 2 type of services that are commonly added to all the assets:

Each service is distinguished by the DDO.service.type attribute.

A part of the attributes.main sub-section, other optional sub-sections can be added (like: attributes.curation or attributes.extra) depending on the service type.

The Integrity policy for identity and metadata is a sub-specification allowing to validate the integrity of the Metadata associated to an on-chain object (initially an ASSET).

How to compute the integrity checksum​

An ASSET in the system is composed by on-chain information maintained by the DLT and off-chain Metadata information (DDO) stored by the PROVIDER.

Technically a user could update the DDO accessing directly to the off-chain database, modifying attributes (e.g. License information, description, etc.) relevant to a previous consumption agreement with an user.

The motivation of this is to facilitate a mechanism allowing to the CONSUMER of an object, to validate if the DDO was modified after a previous agreement.

This hash composing the integrity checksum is calculated in the following way:

Because this DID HASH will be stored on-chain and emitted as an event, a validator could use this information to check if something changed regarding the initial registration.

The DID Document (DDO) SHOULD include the following proof information:

Here is an example proof section to add in the DDO:

Using the proof information, a third-party with access to the DDO could validate the creator signed a specific integrity checksum referring to an Asset.

Length of a DID​

The length of a DID must be compliant with the underlying storage layer and function calls. Given that decentralized virtual machines make use of contract languages such as Solidity and WASM, it is advised to fit the DID in structures such as bytes32.

It would be nice to store the did:nv: prefix in those 32 bytes, but that means fewer than 32 bytes would be left for storing the rest (25 bytes since "did:nv:" takes 7 bytes if using UTF-8). If the rest is a secure hash, then we need a 25-byte secure hash, but secure hashes typically have 28, 32 or more bytes, so that won't work.

Only the hash value needs to be stored, not the did:nv: prefix, because it should be clear from context that the value is a Nevermined DID.

How to compute a DID​

The DID (id) string begins with did:nv: and is followed by a string representation of a bytes32.

As is described previously, the DID is calculating doing the Hash (SHA3-256) of the DDO.proof.checksum entry

To register the different kind of objects can be stored in a simple register contract named DidRegistry. This DidRegistry can act as generic/flexible way to associate Resources (ie. Assets) to the public providers resolving the DDO (and Metadata included) of those resources.

The key of the Identity entity in Nevermined is the DID. Each entity will have a unique DID.

Applied to Assets, typically are part of a Service Agreement. The suggested approach to implement this is:

Here is a draft DidRegistry implementation:

To register the provider publicly resolving the DDO associated to a DID, we will register an attribute with the public hostname of that provider:

The resolving capabilities will be encapsulated in the Nevermined SDK libraries (JavaScript, Python, etc.), allowing to resolve a DDO directly speaking with the Smart Contracts.

No third-party requests or API need to be integrated. This allows to have a simple a seam-less integration from the consumer side.

This is a generic definition of what could be exposed in the client libraries from an API point of view:

Because the DID and key are indexed parameters of the event, a consumer in any supported web3 language could filter the DidAttributeRegistered events filtering by the DID and the key named "service-ddo".

A DDO pointing to a DID could be resolved hierarchically using the same mechanism.

This is an example in JavaScript using web3.js:

This logic could be encapsulated in the client libraries (SDK) in different languages, allowing to the client applications to get the attributes enabling to resolve the DDO associated to the DID.

Using this information a consumer can query directly to the provider able to return the DDO.